Make an Easy Birthday Card with your Cricut

Make an easy birthday card with your Cricut - greeting card tutorial to make a beautifully simple card and envelope.

This design makes a lovely birthday card that can be used for men, women, children... everyone! And I also have a collection of similar designs for other occasions that are all based on the exact same way of making a card with your Cricut - super easy. 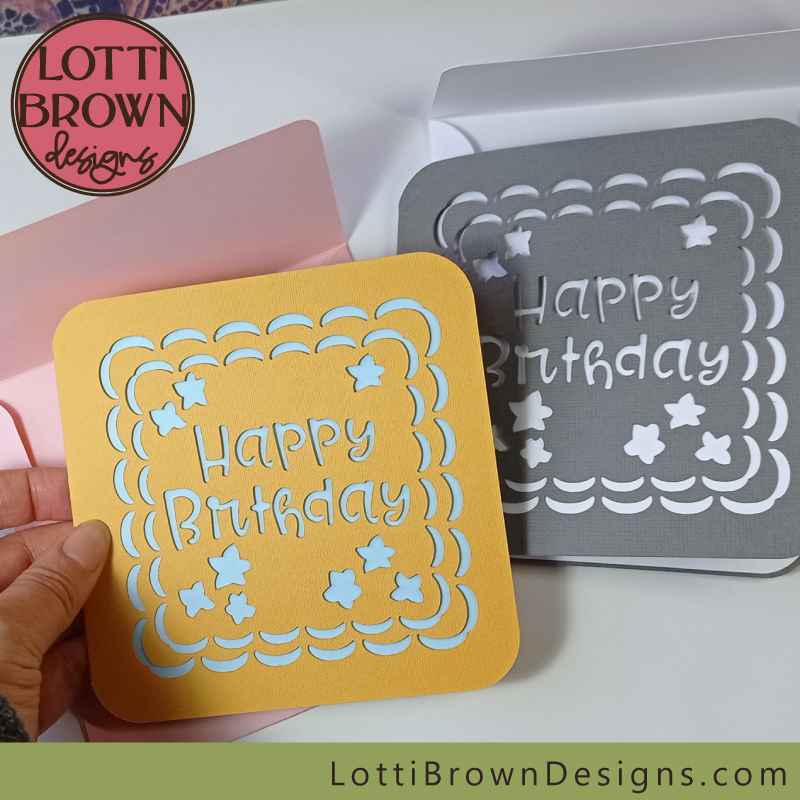 Make an easy birthday card with your Cricut

Get the Happy Birthday card template from my Etsy store here

Or browse for other card templates that use this method here

This easy birthday card uses my Happy Birthday card template (available to download from my Etsy store here...). It can also be used for any of my similar greetings cards templates - it uses exactly the same card-making method.

This Cricut greeting card tutorial requires the card to be cut and scored first, using your Cricut, another cutting machine (such as Silhouette or ScanNCut) or cut and scored by hand.

If you're using a Cricut machine, I have a tutorial here showing you exactly how to set the score lines in Cricut Design Space so that they score (rather than cut) - it shows how to do this both for the scoring stylus and scoring wheel in Cricut and also gives a method of scoring by hand if you don't have a scoring tool.

If you're cutting with another machine type, please check their help pages for information on how to set a score line, or just delete the score lines in your programme and create them manually as I describe in the score lines tutorial mentioned.

Once you've cut and scored your card, please come back here to find out how to fold and assemble the card...

Please note that the files are set up to cut on a standard Cricut mat, NOT the new card mat!

Choose your own cardstock colours to create your own unique greetings cards with your Cricut - I've tried to make my greetings cards in lots of different colours - and I always make my layers different colours for you, so that you can easily tell which is which, but feel free to change the colours, experiment, and make the design personal to you and the intended recipient.

If you're using another file type or cutting machine programme, or if you need to resize PNG files, you can get the dimensions for the files here...

My card templates are for personal crafting use or for small-business commercial use (up to 200 products) - in both cases, it's for physical products only - no digital products, printables or sharing, please. So if you make cards, you can sell them at craft shows or online.

How to Make the Easy Birthday Card with your Cricut 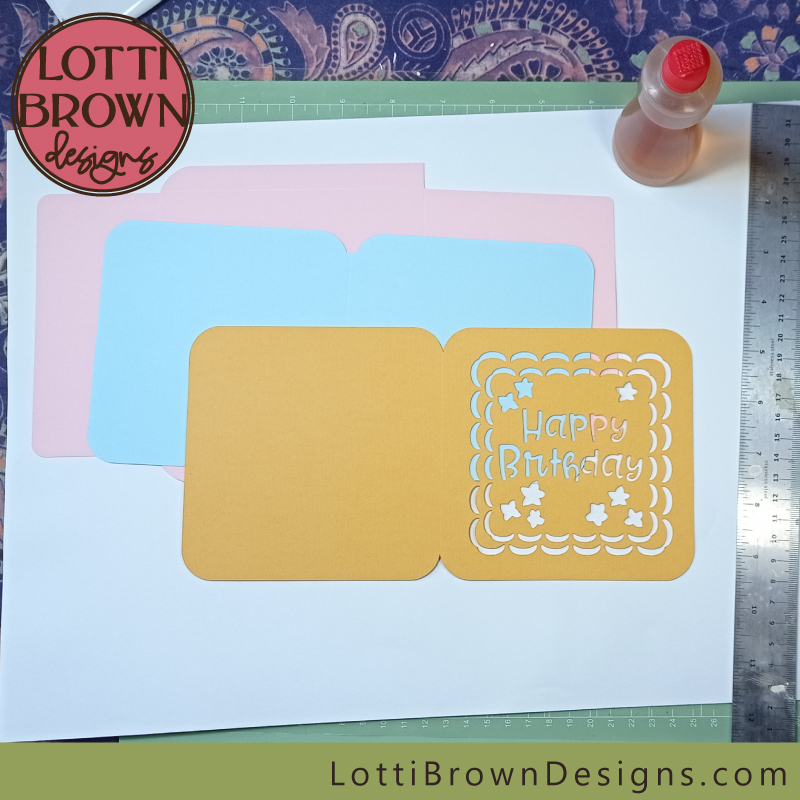 How to make this easy birthday card with a Cricut

3) Now, we're ready to start assembling the card. Let's start with the outer card - that's the bit with the cut-out design - in this example, the yellow Happy Birthday piece. 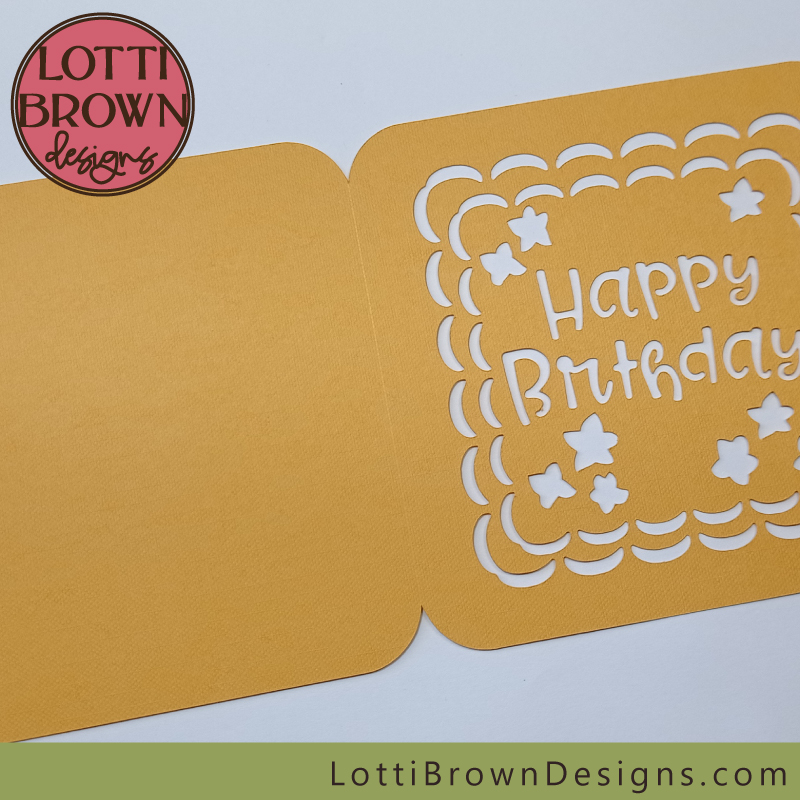 The outer card has the cut-out design

We need to use a metal ruler to help us fold the line cleanly - I use a metal ruler as it has a clean, firm edge that's unlikely to wear or damage, and it's a nice hard edge to fold against. So line your metal ruler up very carefully against the fold - not on the fold, but just ever-so, ever-so slightly to one side of the fold, so that you can still see the fold... 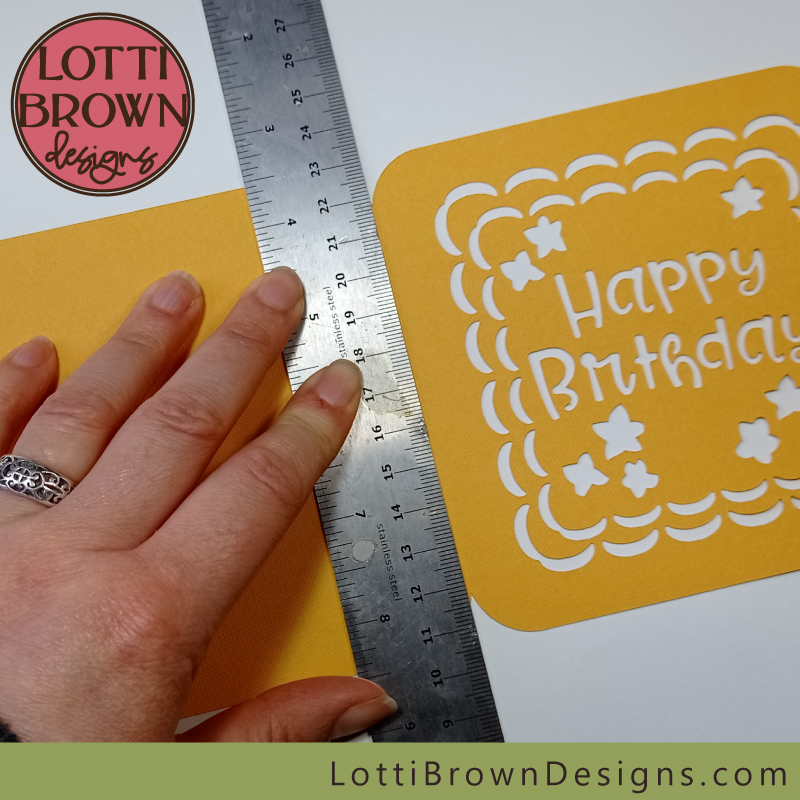 Position the metal ruler up against the score line, ready to fold the card

Press down hard on the ruler to hold the left-hand side of the card in place - but make sure you keep the ruler still and steady...

​Then fold the right-hand side of the card up towards the ruler using your other hand...

Keeping the ruler in place, run your fingers along the folded edge making the fold firm and neat.

If you're a beginner, you might prefer to place the ruler on the fancy/cut side and fold the plain side up...

The uncut side of the card will be a little sturdier and less prone to bending as you fold! 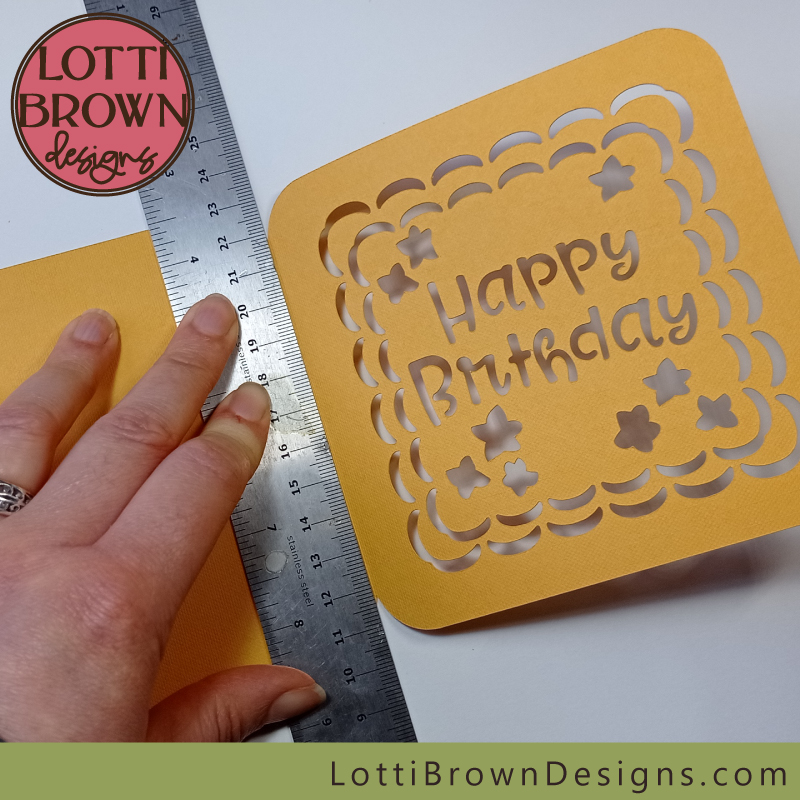 Then, we fold the fold the other way (so that it looks like a proper card) - again you can gradually run your fingers and thumb along the fold, making sure that it's folded neatly and firmly. 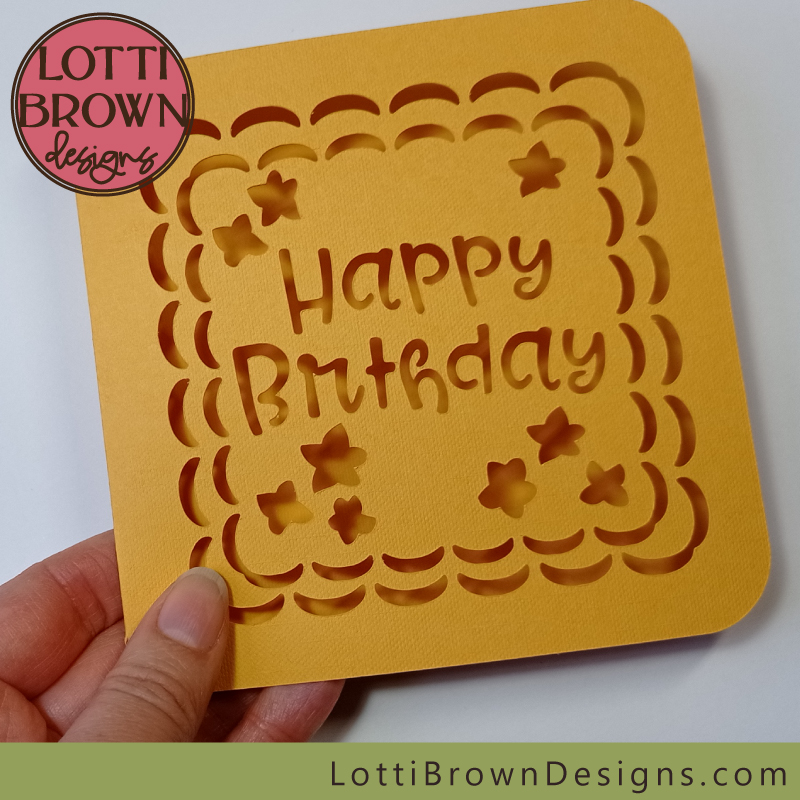 The outer portion of your card should now look like this

4) Let's go onto the inner card - this is the plain, slightly smaller card (pale blue in this example). Start by locating the score line in the middle of the card - it doesn't matter if it only looks faint... 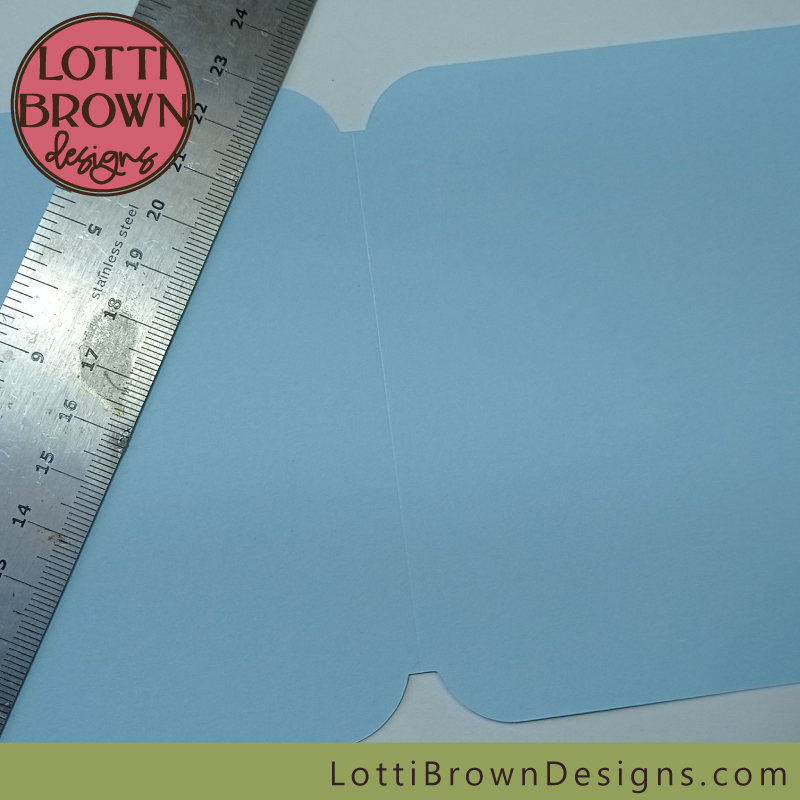 Score line on the inner card

Using the same method, we just position the metal ruler right up to the score line - and first fold up towards the ruler... 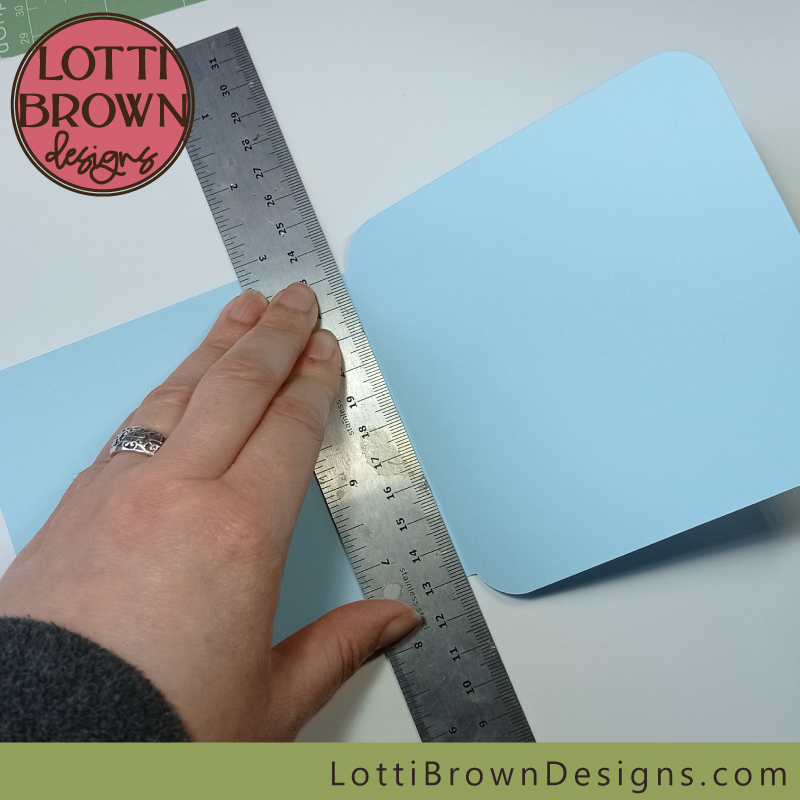 Use a metal ruler to create a clean fold 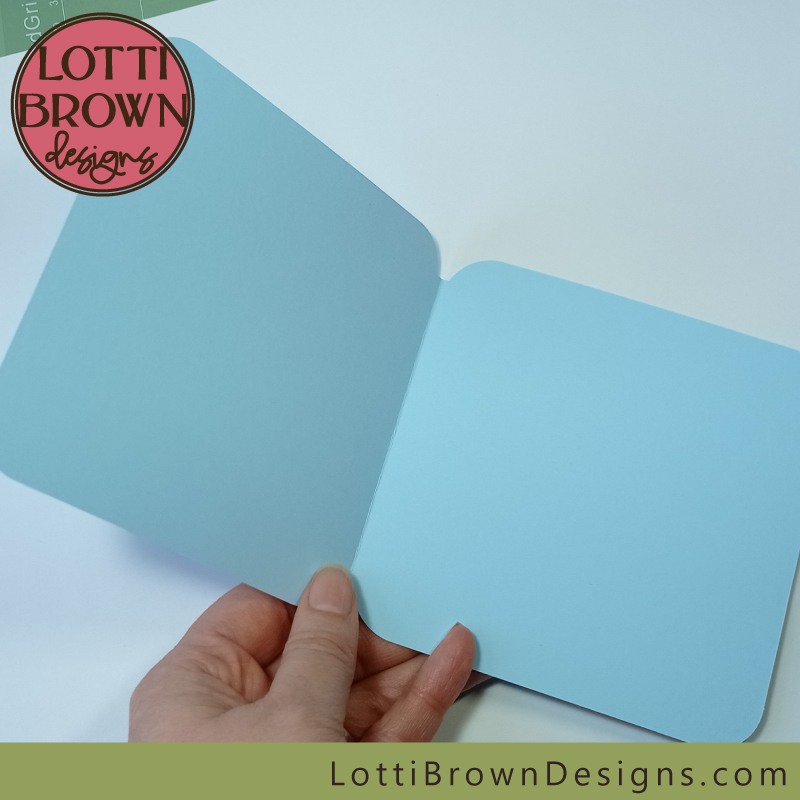 Making the first fold on the inner card

Then, just like for the outer card, we fold it back on itself, squeezing the edge gently between fingers and thumb to create a nice firm fold.

Just like for the outer card, the score line will be on the outer edge of the fold - this is what we want for every fold that we make when we're making cards or other papercrafts. It makes the fold much neater. 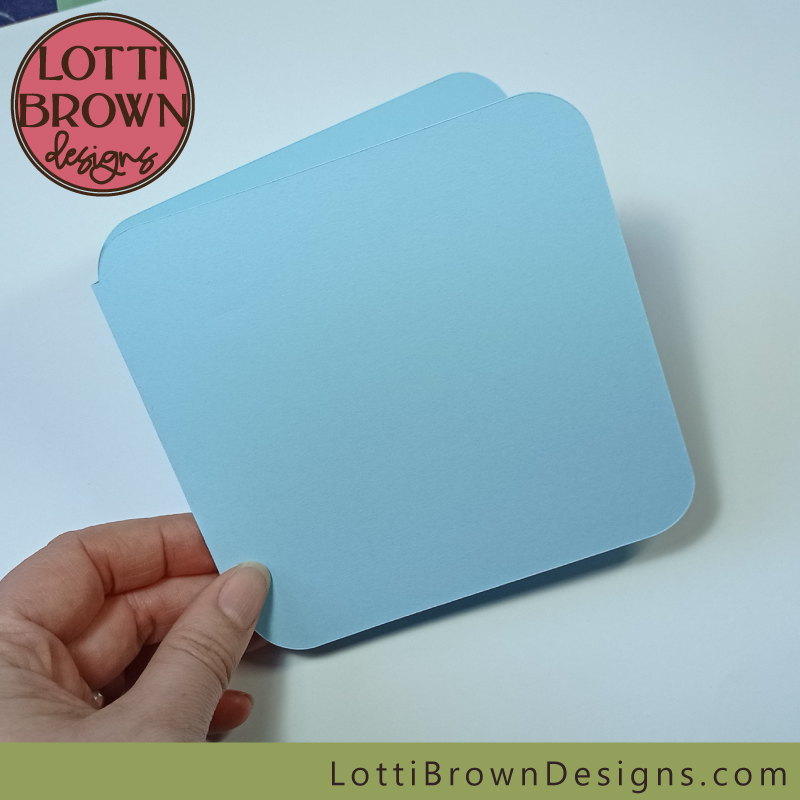 Fold back to create the finished fold

5) Now, let's get on with the envelope. This has four score lines in a square. 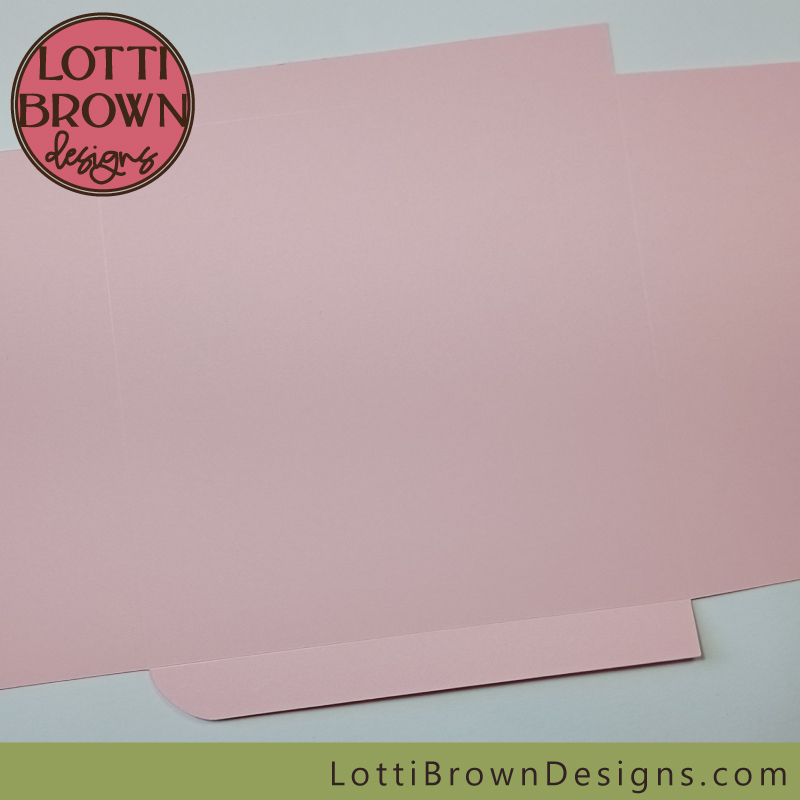 The envelope - scored but not yet folded

We just need to use exactly the same method, folding up the flaps along the score lines, using the metal ruler as the folding edge... 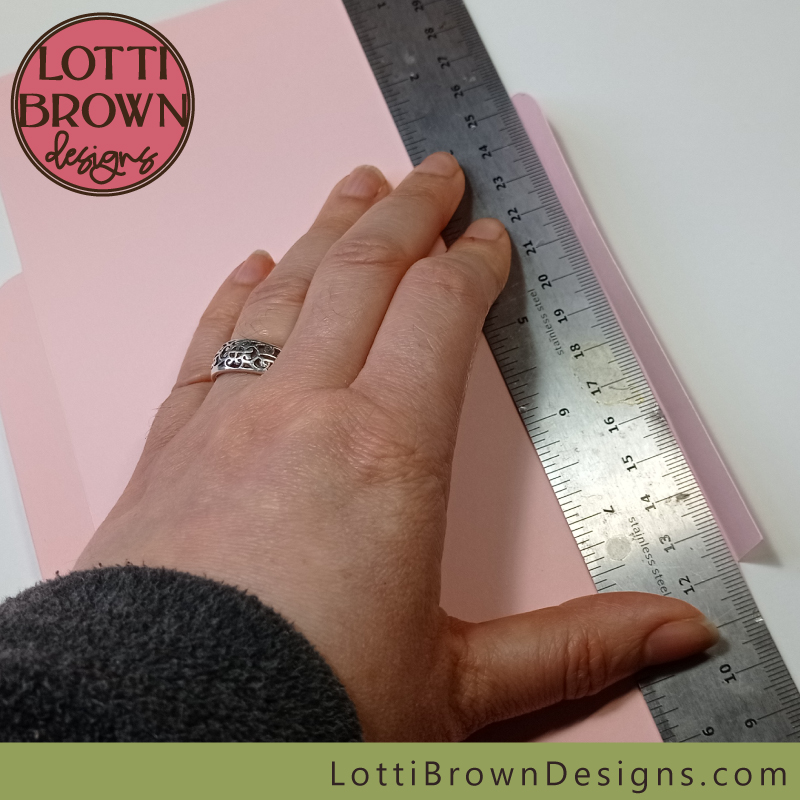 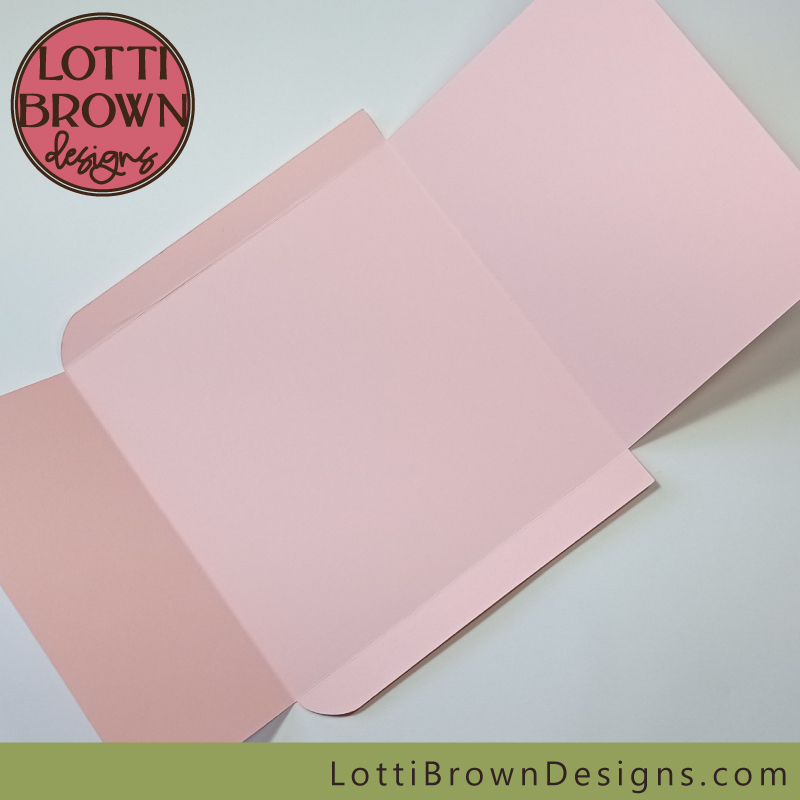 Folds ready for the second folding

And then folding each fold back on itself, so that the score line is on the outer edge of the fold - remember to squeeze with fingers and thumb as you go, to create a firm fold. 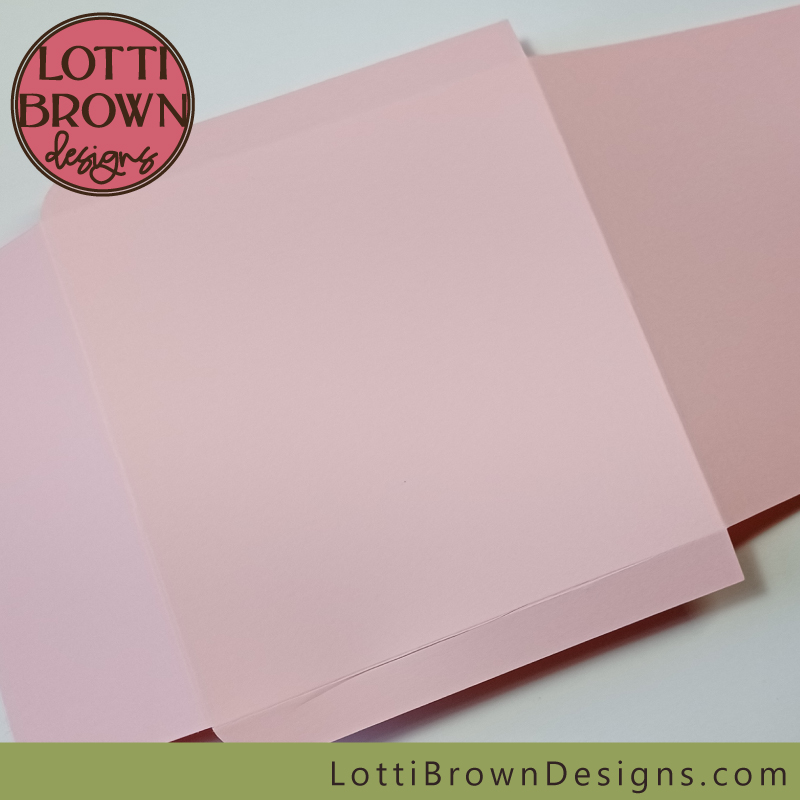 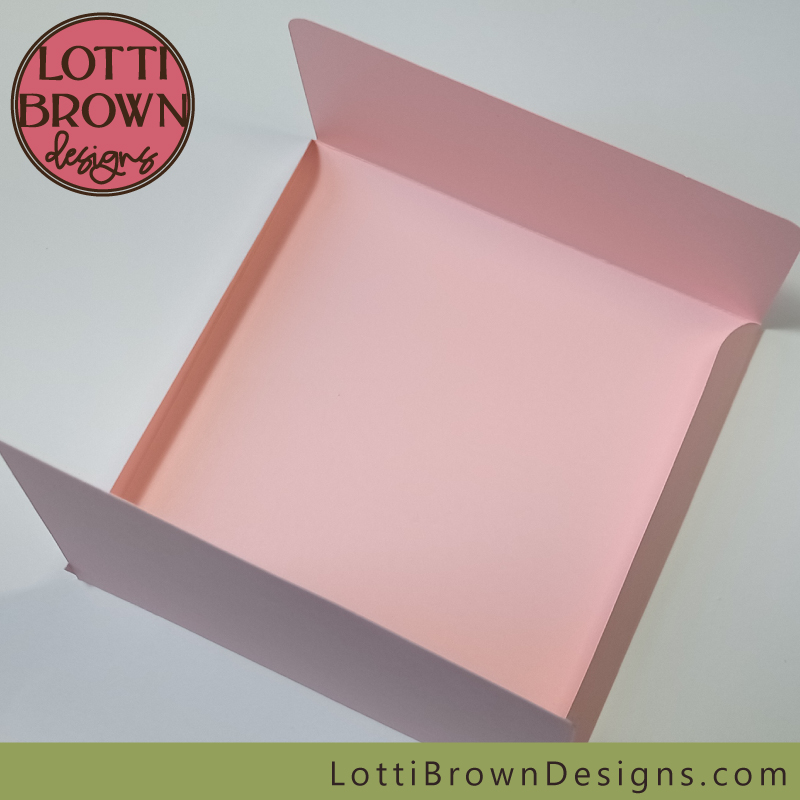 The envelope is starting to take shape

Apply glue to each side edge of the longer flap - don't go too far in from the edge - but try not to get too close to the edge, either! Do not apply glue to the top or bottom edges of the flap!

​I've used paper glue here, but I found that a glue stick was a little easier and less messy. The paper glue seemed to adhere more firmly, though. 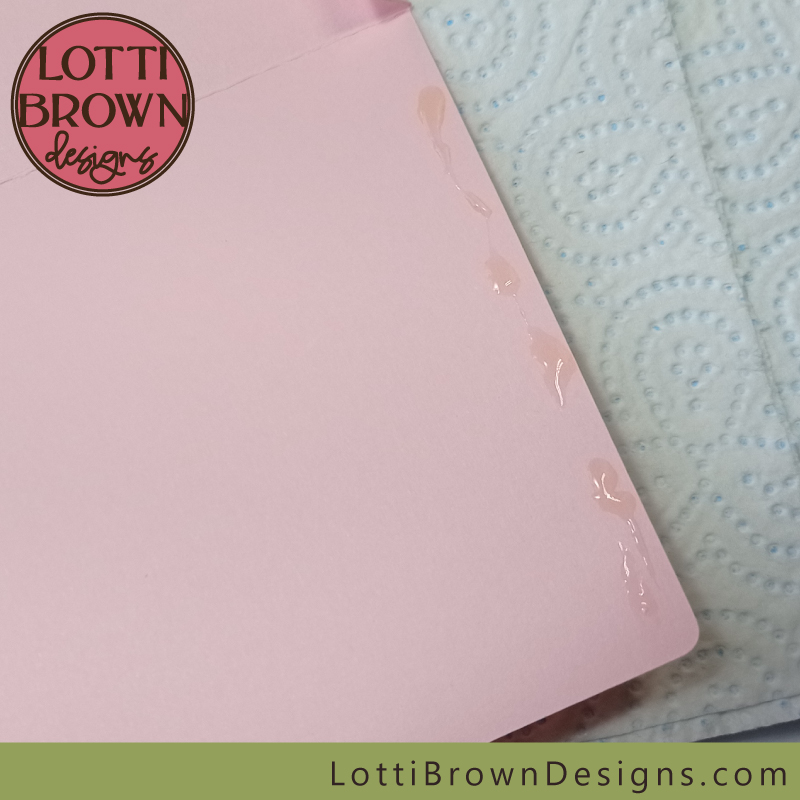 Carefully apply glue, just along the side edges of the larger flap

Now, simply fold in the edges and flap and apply pressure for a minute or two to allow the edges to stick down well.

Your envelope is ready! 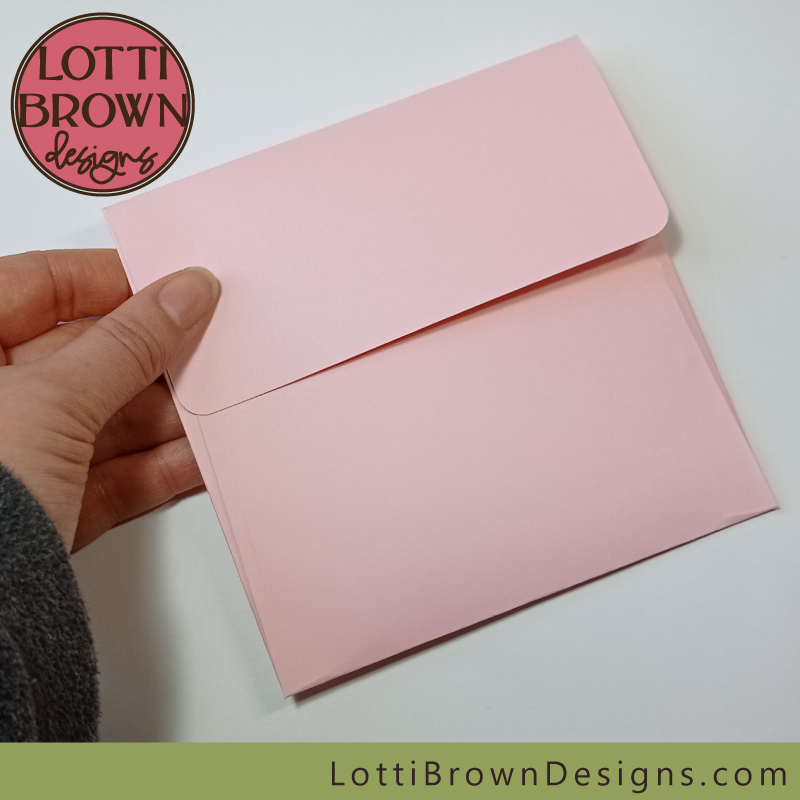 You can add double-sided sticky tape (with the protective bit still on) to your envelope closure flap, if you choose, so it's easy to seal and send

6​) Now, we just need to glue the inner card to the outer card - this is quite simple but there are a couple of things just to be aware of and bear in mind... 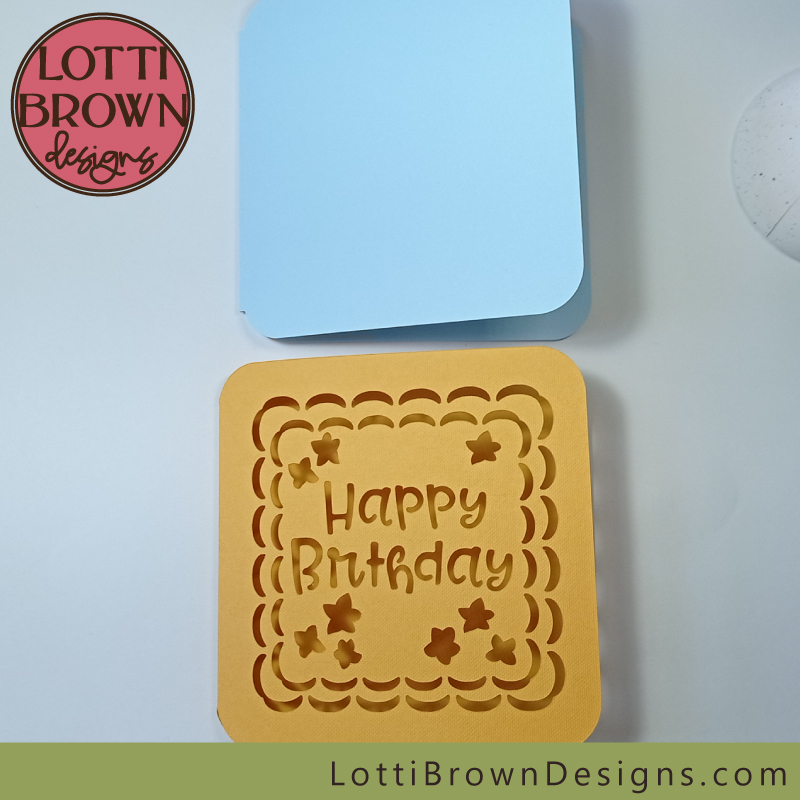 Get ready to glue the inner and outer cards together

Think about the type of glue you use and the quantity - especially if you're using thinner papers and cards, glue can buckle them. This paper glue was just okay and didn't affect the inner card quality, but in later cards I made I did prefer to use a glue stick or (top choice) two pieces of double-sided sticky tape. 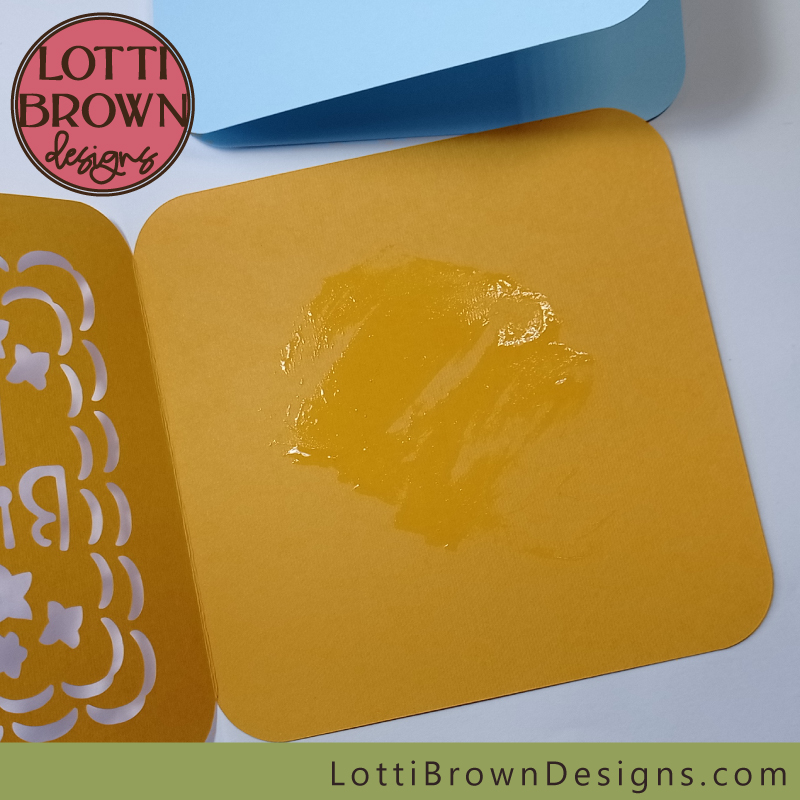 When you're positioning the inner card, don't thrust it up as tight as you can into the fold - leave the fold a little space to move (it doesn't need much, but does need a just a little) - but also make sure the edges won't poke out beyond the edges of the outer card... 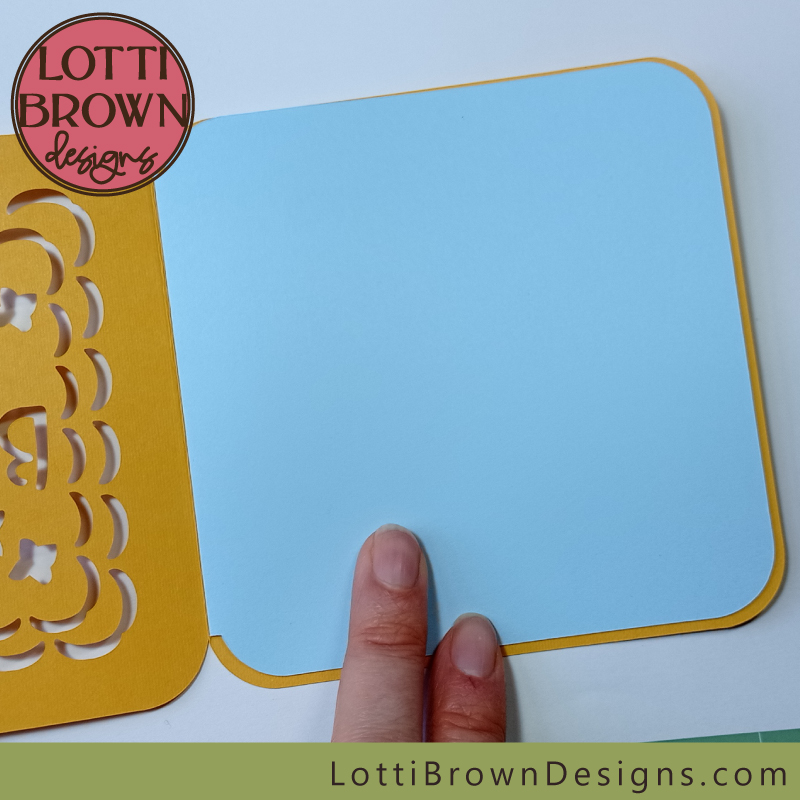 Positioning the inner card - not too close to the fold!

We only want to glue that one surface down - the front flap of the inner card will be left loose so that people can admire the cut pattern in the card. 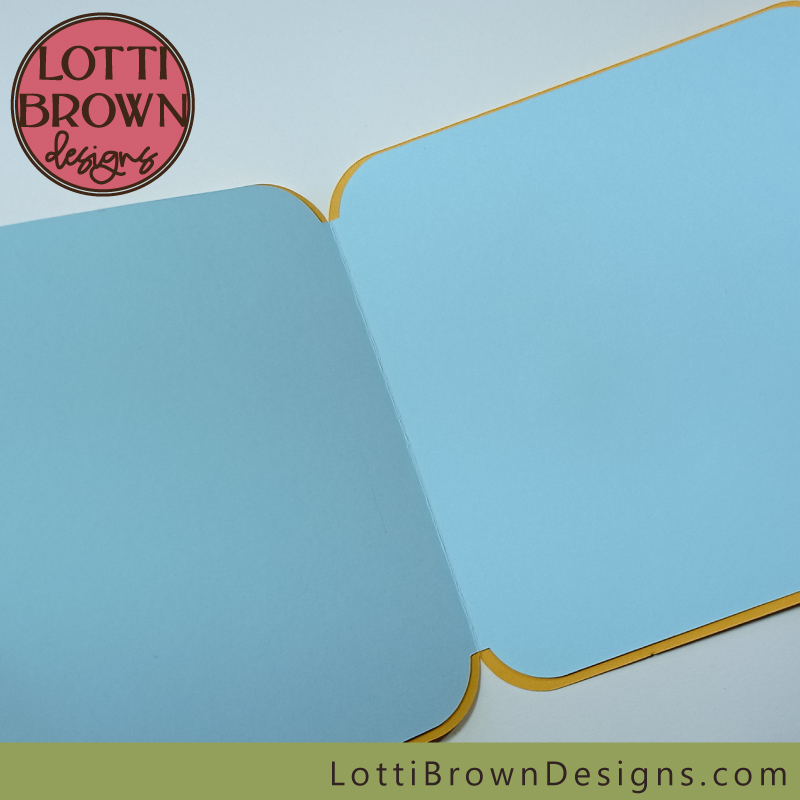 How the inner card will look when the card is opened

So your birthday card is now finished! Well done! 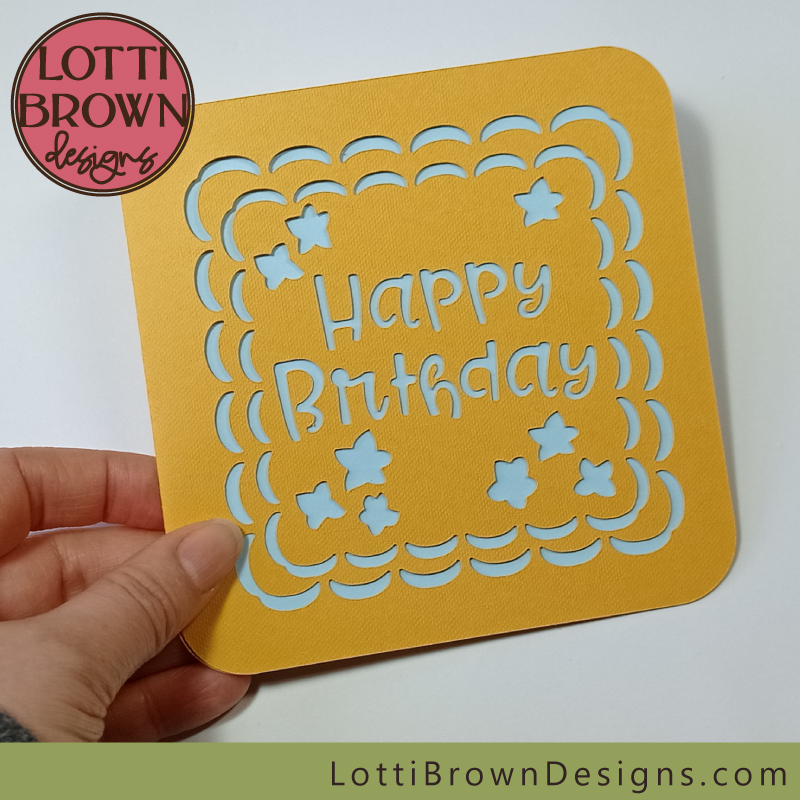 Easy birthday card made with Cricut 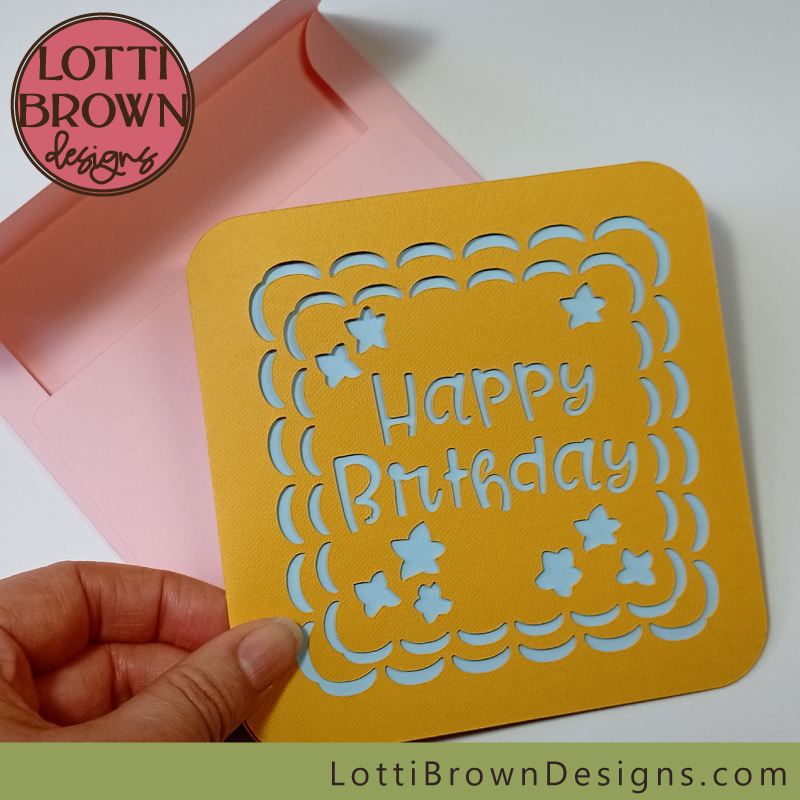 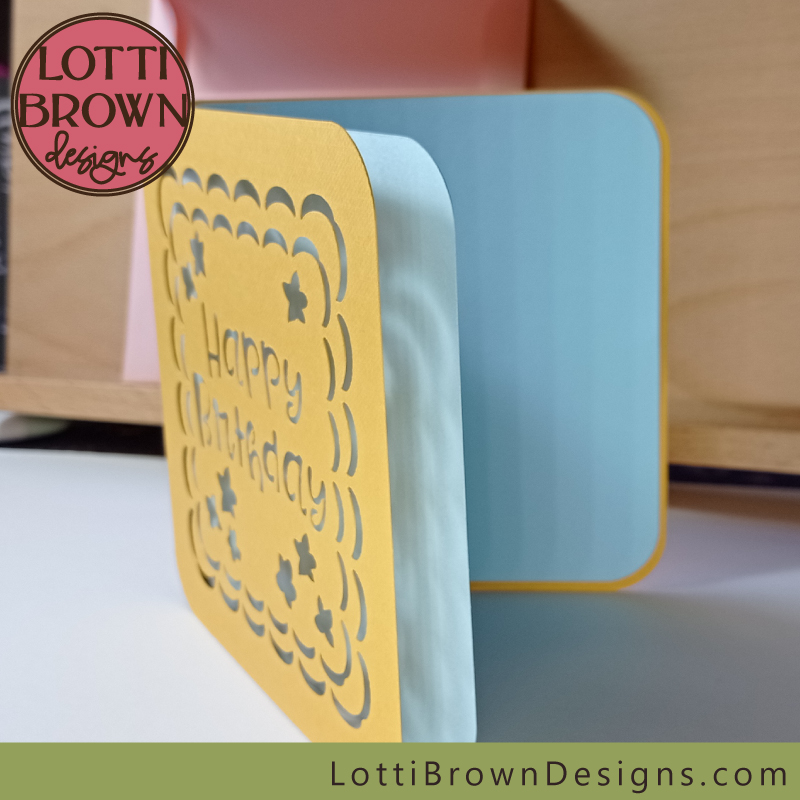 Showing how the card will open 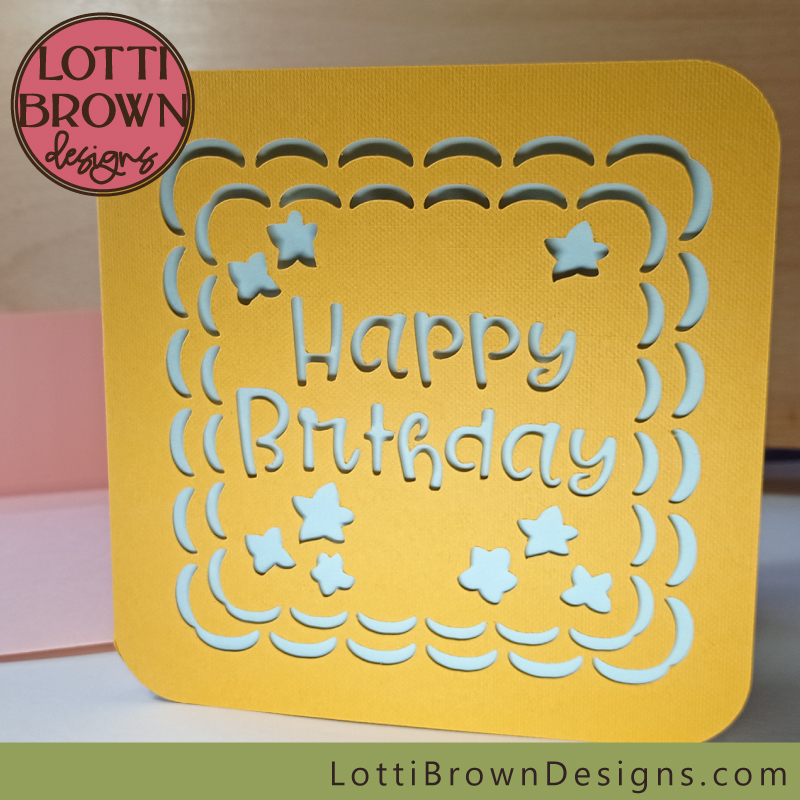 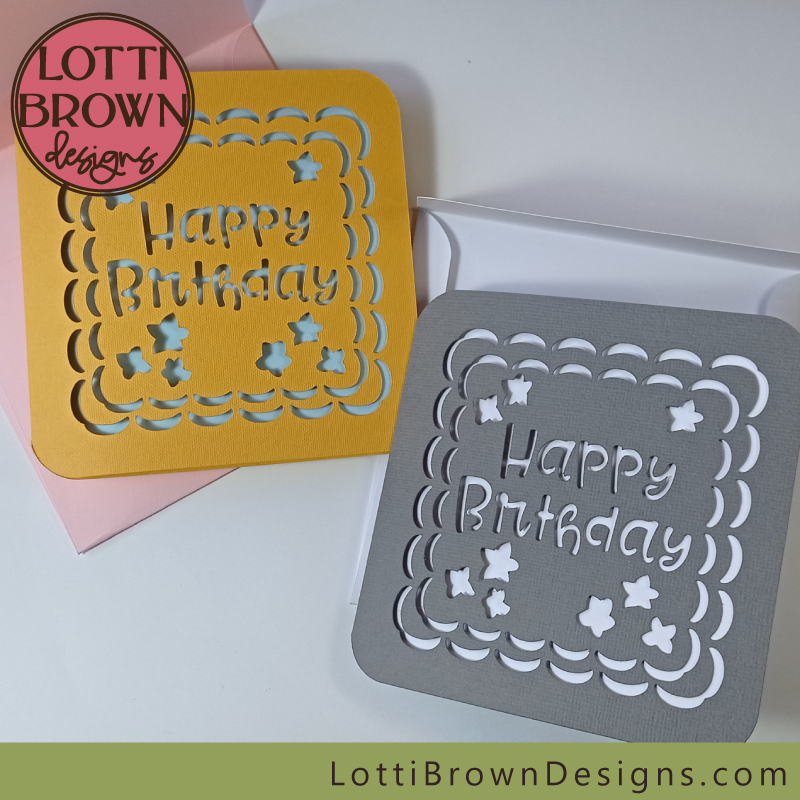 Change the colours up on your Cricut birthday card to make it suitable for men, women, kids, grannies - everyone!

One of the lovely things about these greetings cards, is that the design is so simple, it's easy to just change up the colours and make it suitable for everyone in your life - whether you want a pretty pink for your mum, a trendy teal for your teen, a fun orange for your kid, or a sophisticated neutral to suit those with more muted colour tastes, you can do all that with the same card template!

Here's a nice simple grey and white that I tried to give a beautifully simple look - perfect for your elegant friend or anyone with more minimal tastes when it comes to colour... 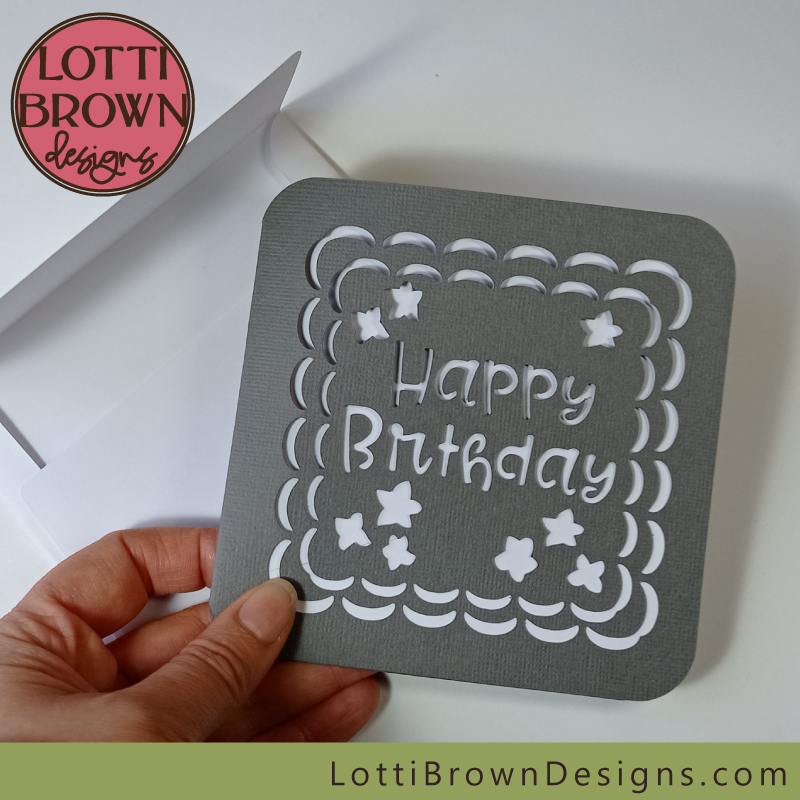 Using neutral-coloured cardstock can be incredibly effective for your home-made greetings cards - perfect to make a few and keep in stock for those unexpected birthdays that sometimes seem to just spring on us! 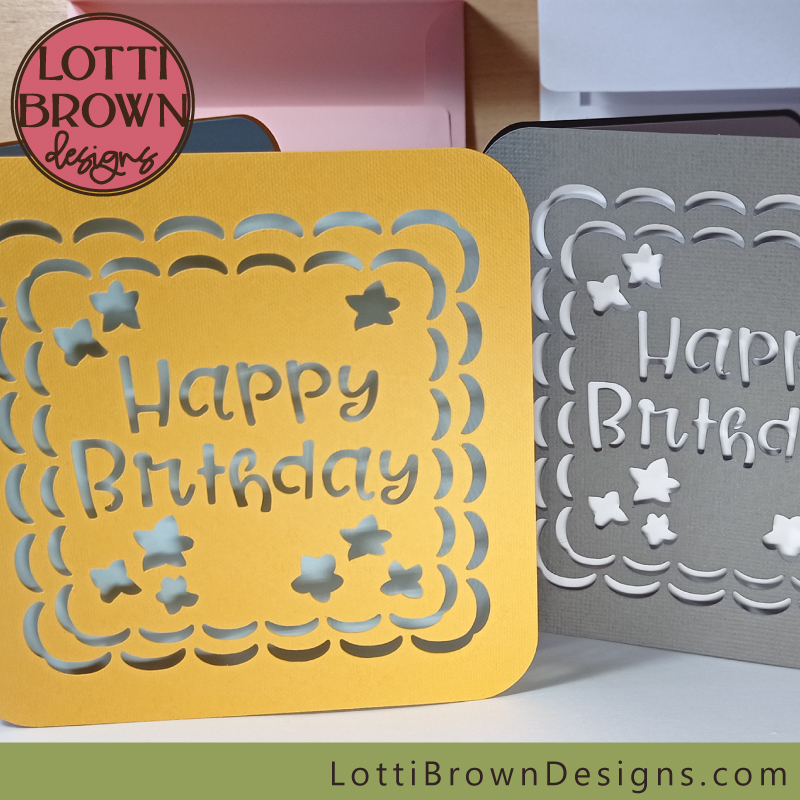 I hope you've enjoyed this easy birthday card to make with your Cricut - the greeting card tutorial will work exactly the same for all my other greetings card in this style - square with the inner card - as they're all the same basic card template with different messages and designs...

You will need this digital card template if you want to make this Happy Birthday card - you can download it from my Etsy store here... 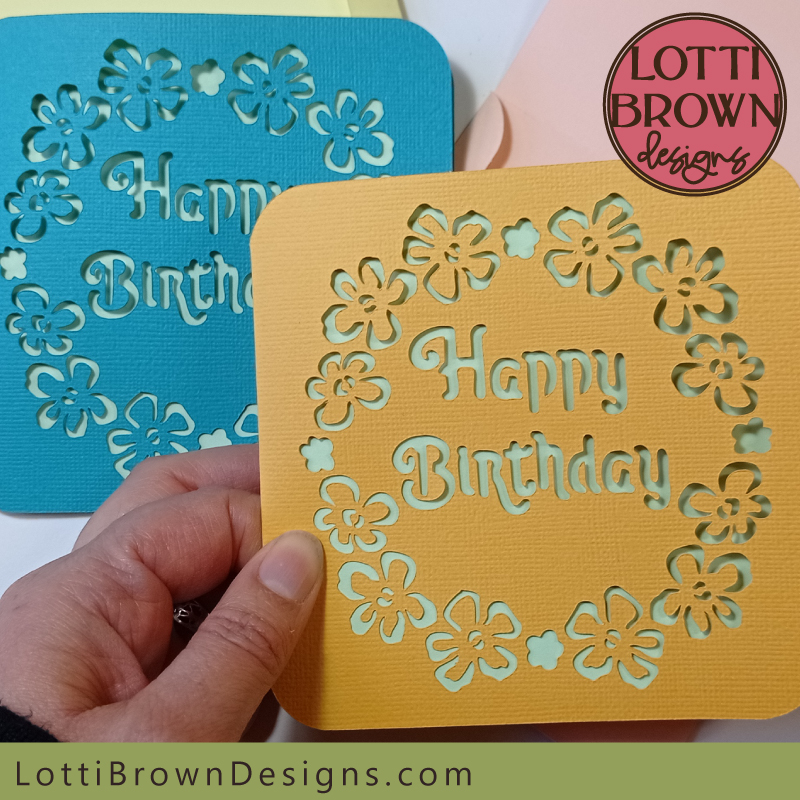 For an alternative birthday card SVG design for you to make, check out the floral Happy Birthday card on this page...

You can see the other greetings card designs in the range at this page...

To get the best out of this tutorial, remember to start with this tutorial which helps you to set the score lines correctly on your Cricut, if you need help with that...

And help with how to use your Cricut here...

Want to keep in touch?

And get this beautiful cut file for free?

Sign up below for my free email newsletter to get:

My newsletter is usually sent out once a month (at the start of the month) and you can unsubscribe any time... 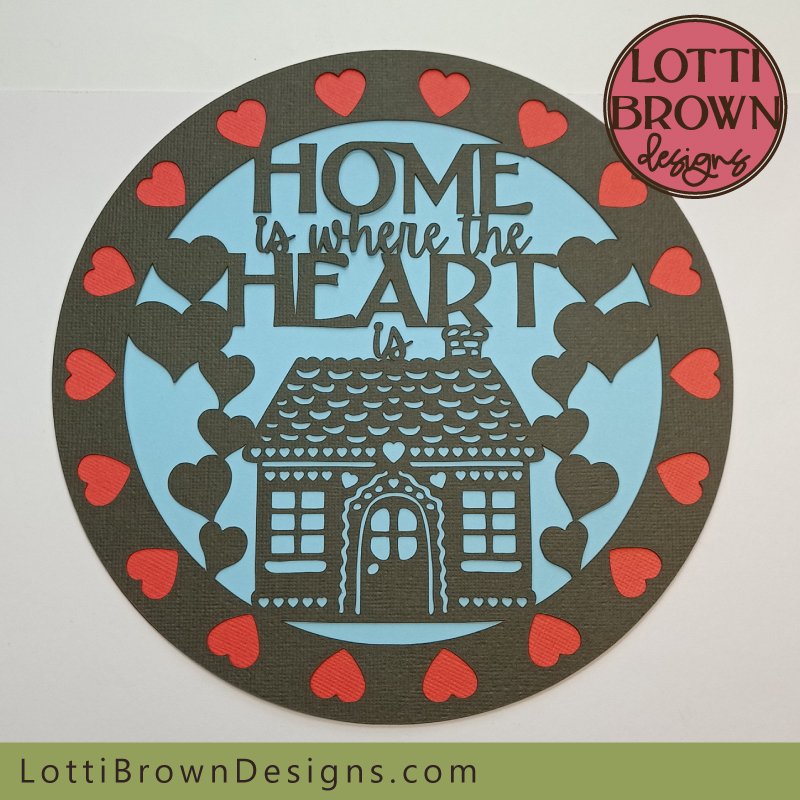 Get this beautiful 'Home is Where the Heart is' layered cut file for free - SVG, DXF, EPS & PNG formats (personal use only)

All Rights Reserved - any infringement of my rights of copyright in the images & text of this website and accompanying materials will be pursued seriously.